Conquer Hunger As You Exercise And Diet

In last week’s blog I brought up the subject of whether exercising makes you more or less hungry. That question got me thinking about how hunger is the chief culprit that sabotages people when they’re trying to lose weight. I then remembered that I have on hand a fantastic article by Consumer Reports about this much-hyped issue. “The Truth About Dieting” was the magazine’s cover story in its June 2002 issue. Ever since it was released, Bar Method studios have kept copies of it behind their front desks to hand out to students asking for advice on how to shed pounds. 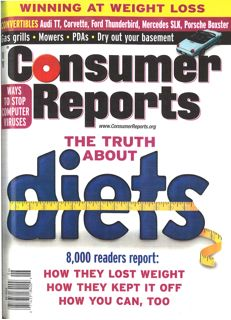 “The Truth About Dieting” reports on a compilation of research about dieting and hunger, including a five-year research study carried out by Consumer Magazine itself on 32,213 dieters. The evidence the authors gathered leads to a surprisingly upbeat conclusion: losing weight is actually doable – if you do it right.

Consumer Reports first took an unbiased look at diet plans. What it discovered is that making up your own diet is more successful than going to a commercial diet program like Jenny Craig or Weight Watchers. Among the 32,213 people in its study who lost 10 percent of their body weight and kept it off a year 83 percent said they used “my own diet and exercise regimen” with no outside assistance or dietary supplements.

Then the magazine examined which foods work best for weight loss. Based on compelling scientific evidence it came up with four diet guidelines that will enable you to more easily consume fewer calories:

on protein:” “Low blood sugar makes us feel hungry,” says the magazine, so to keep it from plummeting avoid foods with a high “glycemic index,” such as sugar, refined flour, rice, pasta and potatoes. Such foods “turn into blood glucose much more quickly than carbohydrates in high-fiber foods such as fruits, vegetable, legumes, and whole grains.” The resulting surge of insulin gives us low blood sugar.

Also, eat some protein with your meals, which “slows the absorption of food,” according to one of the researchers in the article. Here is one amazing study on this phenomenon that the magazine described: David Ludwig, a researcher at Children’s Hospital Boston, served a group of overweight teenage boys a breakfast and lunch consisting of low/glycemic-high protein food. He gave another group of overweight boys a low-fat, low protein breakfast with an equivalent amount of calories. Both groups of boys were then allowed to eat for dinner all they wanted from overflowing platters of “bagels, cold cuts, cream cheese, cookies and fruit.”  The boys who’d eaten the low-glycemic/high protein breakfasts and lunches ate 81 fewer calories of this stuff.  Eight-one fewer calories! Ludwig switched the groups and tried it again to make sure he was seeing straight.  Same result.

Strategy #3. Have a little fat.”For years health experts including the National Institutes of Health and the American Heart Association have sent us a “fat is bad” message. To challenge this idea, Kathy McManus, a director of research in Boston, divided 101 overweight women and men into two groups and gave one group a low-fat diet restricting fat to 20% of calories, and the other group an equally caloric moderate fat diet with 35% of calories coming from healthy fats. Eighteen months later the moderate fat group had lost an average of nine pounds, and low fat group had gained around 6.4 pounds.

Strategy #4. “Exercise.” In Consumer Reports’ study group, “regular exercise” was found to be “the No. 1 successful weight-loss maintenance strategy, cited by 81 percent of the long-term maintainers.” Why is exercise so good at helping people lose weight? Consumer Reports suggests a provocative answer. “‘Exercise itself may act to regulate hunger over and above the obvious fact that it burns up calories,” James Hill, codirector of the National Weight Control Registry said in the article. “The vital role of exercise€¦applies more to the maintenance of weight loss than to losing weight in the first place.” When it comes to long term maintenance, the evidence seems to weigh in favor of exercise being the ultimate key appetite suppressant. Based on my observation of many of my students’ weight loss over time, I wholeheartedly agree.