This morning my boyfriend Michael and I went to a 24-Hour Fitness club in our area spent about an hour working out. Four days ago, he had a hip-replacement and he wanted to get his new hip moving by taking some steps on an elliptical. I’d never been to a 24-Hour Fitness Health Club, so I was interested to try it out. 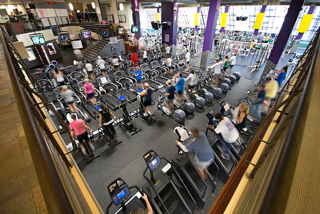 We checked in with the friendly, laid-back guy at the front desk. Behind him, packed 15-wide, were rows of cardio equipment – stationary bikes, ellipticals, treadmills and stair climbers. The far side of the space held the weight training devices and free-weights. At 8:30 am when we arrived, virtually all of the cardio machines were in use. While Michael did some stretching, I found an free stationary bike and got on it. As soon as I started peddling, the dashboard on my bike lit up to let me know, among other things, the amount of time since I started, my speed and/or “distance” covered, the number of calories I was burning and the degree of resistance I’d chosen. 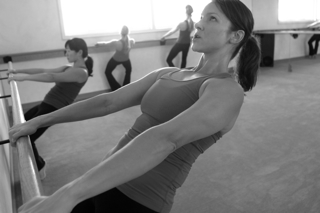 High up in front of me hung five big TVs that gave me a choice of watching sports, news, traffic, weather or politics as I peddled. I let my attention bounce back and forth between the read-outs on the bike and the tidbits of information that trickled down from above. “The recession has caused Botox sales to plummet,” a morning show anchorwoman said at one point, to which her male counterpart added, “I hate women who frown. You don’t see my brow furrowing€¦” In a Bar Method class, I wouldn’t be catching random conversations on TV. My attention would be fully employed dealing with the intensity of the moment. (Bar Method classes have recently been getting especially challenging in adherence to the Bar Method’s principle that the more rigorous the workout can get while remaining safe, the better.) So the thought of fighting my way through the last set of thigh-work while following some chit-chat about Botox is laughable.

Are the people using all this equipment getting benefits? Of course. 24-Hour Fitness and other health clubs that feature machines are making their members more fit. Are these facilities significantly changing their members’ bodies? Looking around the room, I wondered if a lot of real body change was going on here. Two fitness components, as far as I could tell, were missing from the workouts that happened to be in progress.

First, there was an over-all lack of intensity in the routines I observed. The cardio equipment users were reading magazines, talking on cell phones or watching their controls. Across the floor in the weight area, a studious quiet prevailed. People adjusted each piece of equipment to suite them. Next, they positioned their bodies on the machine, did some reps, then moved to another device, where they would again take some time to adjust the various components and do a some reps. Experts in exercise physiology agree that intensity, that is, the act of making an all-out effort when working out, is by far the most effective way to increase both strength and endurance. (Read about some scientific studies in my blog Interval Training News.)

Second, there seemed to be very little focus on the exercisers’ back-side muscles. When I was there at least, people used free weights mostly to do biceps curls. Others used the weight machines for their thighs, abs and pecs. One girl did do some triceps lifts with free weights. Even so, all the men focused on their front sides. That may be why slim, fit-looking guy overseeing the weight area was walking around with a pronounced slump. (Read more about the glutes in my blog Secrets Behind Sculpting the Bar Butt.)

Michael used an elliptical machine for about a half an hour. Then he found his crutches, and we left, both of us feeling refreshed. I enjoyed my visit to 24-Hour Fitness. It made me sweat without a great deal of effort. It also left me with a deeper appreciation of the killer, body-changing workout I know I’ll always get at the Bar Method.