Bad habits come in many varieties. Some have straightforward consequences such as eating too much, exercising too little, being on time only occasionally, and habitually letting parking meters expire. Other bad habits are sneakier. They fuse themselves onto you and become invisible until years later when you’re hit with their adverse effect.

The habit of moving your body in deviant patterns – that is, out of alignment with your joints – is one of those sneaky bad habits that can inhabit you for years before you figure out it’s there.  You might acquire these physical “ticks” in childhood, later on as a reaction to stress, or simply by letting your muscles get weak and lazy.  Once these habits latch onto you, they become an invisible facet of your physical personality until for some reason unbeknownst to you, you find yourself with shoulder pain, lower back pain or arthritis in your knees.  Finally the physical therapist you might visit opens your eyes to the fact that your every move is throwing your body off-kilter. 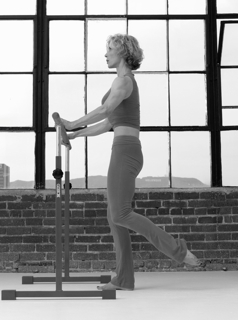 The beauty of The Bar Method as a corrective to these problems is that it is methodical enough to catch many quirky movement patterns before they become injuries. An example of such a problem is the “forward head,” an off-kilter stance I often come across while teaching the “seat-work” section of a Bar Method class. This upright seat-work exercise calls for students to stand at the ballet bar with their bodies as vertical and straight as possible. In this position they lift one leg and press it back against the locked stance held by the rest of the body. As soon as students begin to feel their muscles working, some typically drop their heads forward and down.

This is where Bar Method technique can help.  Because its bar-work exercises last for minutes at a time, the teacher of the class has a chance to gently coach the students whose heads have dropped forward to focus on keeping their heads over their spines. As these bar exercises grow in intensity, students with an especially stubborn tendency to drop their heads forward get additional reminders from the teacher. The challenging nature of the exercises themselves contributes to the students’ kinetic re-learning process, since once they learn to keep their heads up during excruciating exercise sets, doing so in daily life becomes relatively easy.

The most common movement mistake I run across while teaching involves students’ inability to connect to their gluteal muscles. In the same Bar Method’s “seat-work” exercise I described earlier, many students not only drop their heads forward but also routinely arch their lower backs when the exercise calls for pressing back with their glutes.  A number of scientific studies have looked at this phenomenon and reported the same tendency among the subjects they observed. Three studies of lower back pain (Nadler et al., Kankaapaa et al, and Leinonen et al.) pointed to weak gluteal muscles, especially in women, as a major cause of their pain.   One of the studies discovered that the subjects who suffered from lower back pain were the same ones who tended not to use their glutes when swinging their legs behind them.  Instead they arched their lower backs.

The Bar Method puts considerable emphasis on correcting this movement error in the students who display it. Teachers cue their students to “relax your lower back, “keep your hips still and move only your leg,” “feel the contraction in your glutes,” and “pull with your glutes.” Students then get about four minutes on each leg to mentally and physically work on re-wiring their connection to their lower backs and glutes. This re-training not only helps many students’ backs feel better. It also goes a long way towards creating gorgeous “bar butt” shape that is distinct feature of Bar Method bodies. To read more about the Bar’s glute work, read Three Secrets Behind Shaping a Bar Butt.

Click here to find Bar Method exercise classes near you.