In the 80s I didn’t have a lot of money. I worked for public television, and my Lotte Berk Method exercise classes were expensive. So I thought I’d try doing the routine at home before work. I used CDs from the movies “Footloose” and “Beverly Hills Cop” again and again while holding onto a doorknob or chest.  My home workout lasted an hour and a half, whereas the class was an hour. I thought I was not only saving money but was also getting an edge over my fellow Lotte Berk students by making the workout longer.
The truth was I was getting less toned, not more. At the time, I couldn’t figure it out. Now, decades later I realize that I never really pushed myself as hard as the class did. My home workout was lasting so long because I was lollygagging between sets just long enough to avoid hitting those last few moments of intense burning that you get every time in a bar class. After a few months of sweating and panting to Patti LaBelle’s “New Attitude,” I gave up and, with a great sense of relief, went back to my regular 7:45 am class workout.  Quickly my body reverted to the tight, carved shape it had been before my experiment with going it alone.

The advantage of exercising with other people was recently the subject of a New York Times article (9/17/09) on competitive runners.  The story starts in the 70s when U.S. distance runners trained in teams and were among the world’s fastest. Then in the early 80s, the U.S. trend became solitary training with a coach. Soon runners from other countries – all of which used group training — surged ahead. Lately individual U.S. runners who bucked the trend and started to train with other people noticed that their performances significantly improved.   Now the running world is embracing team training once more.

Why do both professional athletes and exercise students do better when working out in groups – aside from the obvious fact that exercise classes come with a teacher who pushes you? First, a class has timing. Running through a series of repetitions in 10 minutes is not the same as doing them in 15 minutes. Every rep depends on the little bit of muscle fatigue provided by the previous rep. Every time you let that fatigue dissipate, you’ve lost some value from the rep you’re doing. A class is going to move you along — or should if it’s doing its job – fast enough to be “kicking your butt” simply by allowing you not as much time between reps as you would allow yourself. Click here to read more about the importance of interval training. 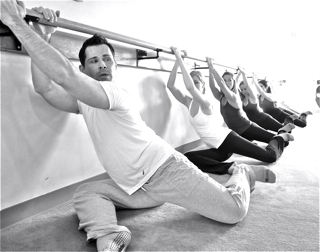 Second, a class contains other students. I didn’t happen to have any friends in the Lotte Berk Method classes I took. Nevertheless, something inside me was always competing with them and at the same time feeling supported by them. People are social. We lock into a social pattern when we’re working in a group, whether or not we know it. Bar Method students’ eyes, glazed though they may be at moments, move around the room at other eyes, facial expressions and bodies. When we see that fellow students are pushing themselves, we get confidence to do it too.

What about home dvd workouts? These do provide you with a kind of social setting, namely the group of performers in the dvds themselves. In the Bar Method dvds for example, you can follow the “modifier” who shows you the beginner moves, be inspired by the “advanced” student who goes for the most challenging positions, and notice when everyone’s legs start shaking.  Some Bar Method dvd students enhance their home workouts by doing them with friends on a regular schedule.  These are the users who report not only getting results but having fun along the way. (To sample the new Bar Method DVDs, click on exercise dvds.)

This fun-factor could be what ultimately makes group exercise work over the long term. People are party animals. Every class is on some level is a form of “happy hour” and its students are somewhat like teammates on “Survivor.” Few solitary workouts that are within our reach for everyday use can match the potential for drama and comedy that endlessly delight us when we’re with other people.

Click to find a Bar Method exercise class near you.